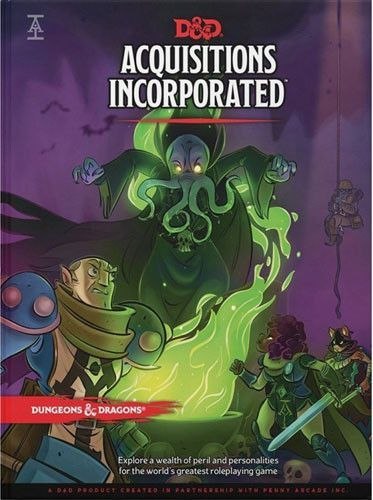 Symbol: C7255
Wizards of the Coast
Brak towaru
152.28
Do przechowalni
Welcome to Acquisitions Incorporated!   Explore a wealth of peril and personalities for the world’s greatest roleplaying game.   The Forgotten Realms are full of powerful factions vying for control, and for a time, each has had the upper hand. The Harpers. The Zhentarim. The Lords’ Alliance. The Order of the Gauntlet. The Emerald Enclave. I might be forgetting one or two. There’s a bunch of these things.   If none of those organizations can help you, consider Acquisitions Incorporated. Called “Faerûn’s Definitive Adventuring Brand” by ... well, by the company itself, they’ve been in operation for more than a decade, and it’s mostly been fine. For them. I should emphasize that it’s been fine for them specifically. It’s not always fine for the people who hire them, and it’s definitely not fine for the people they’re hired to rob. Truth is, though, when you’re just starting out in the adventuring business, it might be nice to have a leg up. It can be a big help to have access to the powerful artifacts, expertise, and jobs that Acquisitions Incorporated has to offer a new franchise. Plus, there are always openings available. Just try not to think about why.   Acquisitions Incorporated is a different flavor of D&D full of madcap heists and hilarious moments, and it’s one of the new ways to tell fantastic D&D stories. Includes an adventure that will take characters from levels 1 through 6, establishing your party's claim on a world they've just begun to explore - and to strip-mine for profit.
Nie ma jeszcze komentarzy ani ocen dla tego produktu.