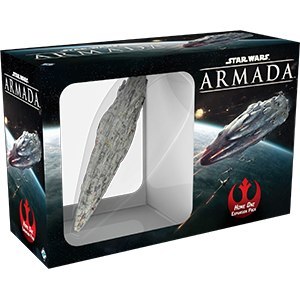 Admiral Ackbar and his flagship star cruiser, Home One, arrive to Star Wars: Armada in the Home One Expansion Pack!

Featuring one large-size, pre-painted miniature MC80 star cruiser, two ship cards, three command dials, and fourteen upgrades, the Home One Expansion Pack gives the Rebel Alliance a ship that boasts battery armaments of six dice from both its left and right hull zones, making it capable of trading blow for blow with nearly any Imperial vessel and empowering a whole new set of tactics that you can employ in your battles for galactic freedom!