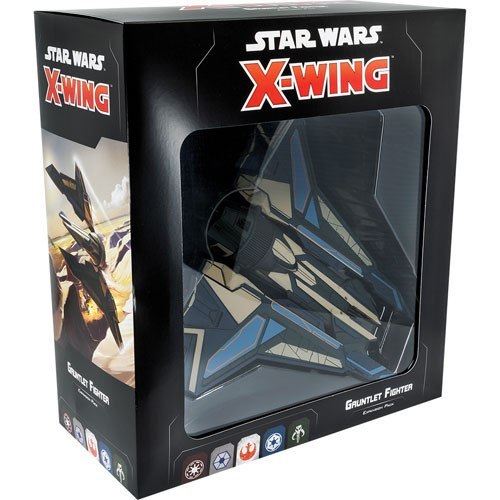 The Gauntlet Fighter is a massive presence in any battle whether serving as a flagship, hard-hitting gunship, or troop dropship for Mandalorian super commandos. Collar mounted swivel wings allow the craft to rotate in place, threatening numerous angles at once. Used by many factions from Pre Vizla’s Deathwatch during the Clone Wars to Clan Wren’s resistance fighters of the Galactic Civil War, this intimidating craft has flown in countless battles across galactic history.

X-Wing 2nd ed.: Gauntlet Expansion Pack contains everything you need to add a Gauntlet Fighter to your squadrons, including a beautifully painted miniature in a classic Mandalorian color scheme, multiple maneuver dials (for each faction), and tokens. Additionally, fourteen ship cards let you choose the pilots who fly this iconic assault ship into battle and eighteen upgrade cards invite you to customize your ship to fit your strategy.