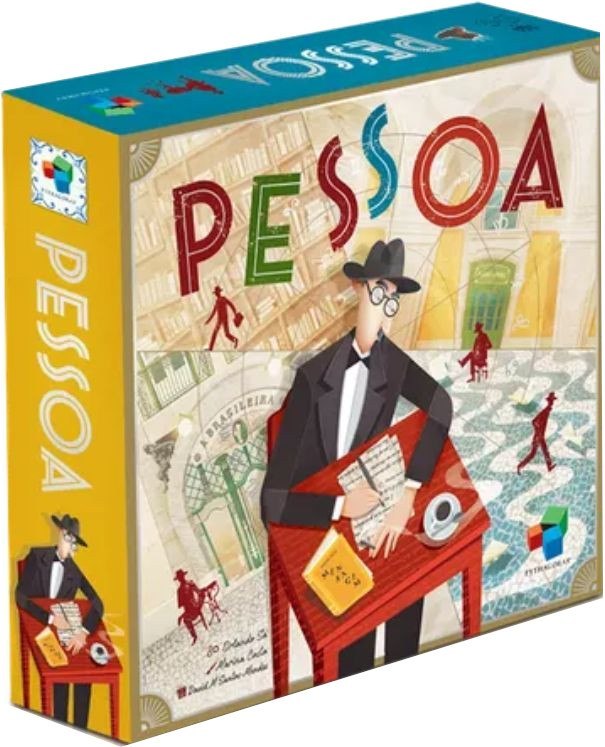 Fernando Pessoa (13 June 1888 - 30 November 1935) was a Portuguese poet, writer, literary critic, translator, publisher, and philosopher and has been described as one of the most significant literary figures of the 20th century and one of the greatest poets of all times. Pessoa was a prolific writer - and not only under his own name because he created approximately seventy-five others. He did not call them all pseudonyms because he felt that some did not capture their true independent intellectual life and instead called them heteronyms.   In Pessoa, you are one of Pessoas most famous heteronyms - Alberto Caeiro, Ricardo Reis, Álvaro de Campos, and Bernardo Soares - and move between the metaphysical space of Pessoa's head and the physical spaces of Lisbon to gain inspiration from the iconic cafés, visit bookshops to expand your library and knowledge, and seek inspiration to write poems, thereby scoring victory points. Whoever has the most victory points at the end of the game wins.   In more detail, Pessoa is a worker-placement game with special rules in which players can place their heteronyms since each player is a different heteronym, but all players are also the same physical person, that is Fernando Pessoa.   The game comes with two modules that can be switched on and off as the players wish. If you play with only the base game, Pessoa fares well as an advanced family game with straightforward rules, but interesting decisions and a more tactical nature. With the modules, Pessoa becomes a more crunchy game, in which extra layers of strategy combine to offer you a rich experience that tries to shine light on the complex figure that Fernando Pessoa was.   The game's rulebook includes historical notes to explain how theme and mechanisms are interconnected, providing you an accurate historical background about this extraordinary poet and his metaphysical creations that had their own personality and writing style: his heteronyms. We hope that at the end of your first game, we have spiked your interest to learn more about Fernando Pessoa and his poetry.
Nie ma jeszcze komentarzy ani ocen dla tego produktu.